The Eastern Mediterranean was one of the first cradles of mankind. Not only modern man (Homo sapiens sapiens) but also his predecessors Neanderthal man (Homo sapiens  neanderthalenis) and Homo erectus settled early on the coasts, islands and inland regions of this area. By the last phase of the Neolithic era (up to about 2000 BC), the Eastern Mediterranean area was densely populated in comparison to general population levels at that time. The inhabitants were racially akin to each other and could be described in one word as "Mediterraneans". They should be considered as the truly indigenous population of the area.

Until today large and small towns are being discovered in Lesbos. The oldest ruins date back to 3200-3100 BC. In Thermi archeologist W. Lamb has been systematically excavating the area and five towns were unearthed, one on top of the other. They represent the time period from 3200 to 2400 BC. The first three towns correspond to Troy I and the other two to Troy II. Only in the most recent level traces of fortifications have been found. This level was probably built by the people of Central Asia because they had begun to constitute a threat as they approached the coasts and nearby islands.

The next thousand years could well be called a dark age because until today no archeological evidence of it has come to light, nor are there any references to it in literature. It should be noted that in Lesbos excavations are still in their early stages: Nobody knows what astonishing surprises the future might bring. Nevertheless, we can safely assume that during this dark age the life of the islanders did not undergo any profound change. This all differed around 1400 BC, when Greeks from Mycenae (Mikines) made their appearance in Lesbos and neighboring Asia Minor. This was the time of the Trojan War and the sack of Troy and marked the beginning of the fall of the great Trojan nation. It would seem, however, that the Myceneans either could not or would not establish permanent settlements in Lesbos. 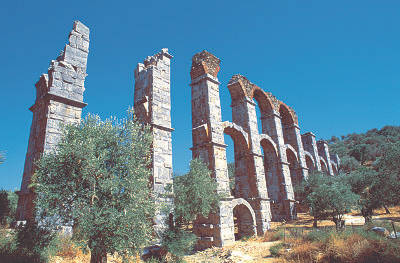 Legend tells that the Argives, led by Xanthus, settled on the island. They were followed by the Achaeans from Olenus in Achaea (Achaea), led by Macares. But despite these influences, the newcomers exerted on the older inhabitants. They continued to preserve the traditions of their culture up until the Geometrical period.

Later, Aeolian Greeks arrived in Lesbos and founded colonies on the island and on the opposite coasts of Asia Minor. They named this area Aeolia. We cannot determine exactly when this influx occurred, but judging from legends and the more general developments of that era, these Aeolians must have arrived from Thessaly about 800 BC. According to one myth, the first Aeolian King of the island was Lesbos, son of Lapithes, King of Thessaly, and grandson of Aeolus. He sailed from Thessaly to the island with his family and married Mithymna, daughter of the local King Macares. King Macares appears to have been a descendent of the Achaeans. From that time the island was called Lesbos in his honor. The previous name of the island is not known.

As it would seem to be this myth is based on actual events and it demonstrates that the Aeolians of Lesbos and neighboring Aeolia are originated in Thessaly. This view is also based on the similarity of the Aeolian and Thessalian dialects of those times. Studying the myth in greater depth, scholars come to the conclusion that the Aeolians probably settled peacefully in Lesbos and, as their civilization was rather more advanced, they absorbed and in time Hellenised the local residents. Thus from that time on Lesbos began to be regarded as an Aeolian Greek island and its previous history was forgotten. The Aeolians of Lesbos were in fact so powerful that for a long time they controlled the other Aeolian towns and regions of Asia Minor, as far as the Dardanelles.

At the outset of the Aeolian period there were six towns in Lesbos, all governed by kings. During the 7th century BC the kings were gradually driven out and replaced by oligarchies or tyrants. In the 5th century BC the town of Arisbe (Arisvi) was destroyed by the Mithymnians and this reduced the number of towns to five: Mytilene, on the site of the modern town of the same name; Mithymna, on the site of modern Molivos; Antissa on the coast, north of modern Antissa; Eressus on the shore, south of modern Eresos; and Pyrrha on the deepest recess of the Bay of Kalloni.

In 570 BC, the islanders took part in the founding of Naucrate, the Greek colony in Egypt. Not long afterwards, Lesbos had become so strong that all-powerful Croesus, king of a vast realm, signed a treaty with its inhabitants. He considered them his equals, although he had subjugated all the other Greeks in Asia Minor. At about the same time the inhabitants of Lesbos allied themselves with the Milesians against the tyrant Polycrates of Samos. But Polycrates defeated them and forced them to dig a moat around his town. Finally, the Persian king Cyrus forced the islanders to sign a treaty agreeing to pay him taxes and send troops to aid him in his campaigns.

At the end of the same century the islanders capitulated to Cyrus without a fight, after seeing all the towns of Asia Minor come under Persian rule. As all on conquerors, the Persians proceeded to appoint a friend of theirs, Coes of Exandrus, as tyrant of Lesbos. When the revolt of Greek towns broke out in 499 BC, the islanders of Lesbos could not remain indifferent. They rose up against Coes, killed him, and went to the aid of the rebels with 70 ships. However, in the battle of Lade in 494 BC, the Persians were victorious and the inhabitants of Lesbos, like the rest of the Greeks in Asia Minor, were completely subjugated to the conquerors. Thus, when Xerxes began his campaign against the Greeks in the Greek peninsula, the islanders fought on his side with 60 ships, but later, after the Persians were defeated in the Battle of Mycale, Lesbos went over to the side of the Athenians. It entered into an alliance in 477 BC.

This alliance lasted until 440 BC, when the Samians revolted against Athens. In many ways Athens had proved to be more tyrannical than Persia. The people of Lesbos soon followed suit. The Athenians were able to subdue once again, but during the fourth year of the Peloponnesian War, the whole island rose up with the sole exception of the town of Mithymna. Mithymna remained loyal to the Athenians. They finally managed to vanquish the remaining towns one by one and set up garrisons in them without razing them.
In 405 BC Lysander the Spartan conquered all the towns of Lesbos. In 392 BC Athens recaptured them, and in 387 BC the island gained its autonomy under the Antalcideian peace. In 369 BC Lesbos entered the Second Athenian League, but fell to the Persians again in 357 BC. They again placed their friends in positions of power.

When Alexander the Great began to conquer Asia Minor, the Lesbians lost no time in allying with him after his victory at the Granicus River. It was one Memnon of Rhodes who made them submit to the Persians once again, this time with very harsh conditions. The Persians were soon driven out by Alexander's General Aegelogus and so the island remained under Macedonian rule up to 167 BC, the date of the first Roman invasion. The Romans settled permanently on the island in 88 BC. At that time Lesbos was an ally of Mithridates, an enemy of the Romans. That was why, although they met with no resistance when they seized the island, the Romans demolished its chief town Mytilene, both then and today the capital of the island.
Pompei granted the island a degree of autonomy which it kept until 70 AD, in the time of the Emperor Vespasian. Later Hadrian gave the people of Lesbos their privileges again. The island continued to prosper into the first centuries of the Christian era, as witnessed by the 57 early Christian unearthed basilicas.

The islanders' peaceful life ended at the moment when Lesbos seemed most invulnerable. Although it was part of the Byzantine Empire it was raided by the Slavs in 769, by the Saracens in 821, 881 and 1055, by the Venetians in 1128 and by Catalan pirates in the 13th century. In 1204 Franks occupied Lesbos and presented it to Baudouin I. From him it passed to the Byzantine Emperor Ioannis III Doukas-Vatatzis in 1224. In 1261 it became a Byzantine Province again. In this year also the first Genoese settled in Lesbos under a special treaty which granted them certain commercial privileges. In 1335 Ioannis V Paleologus ceded the island to his brother in law and Genoese Francisco Gateluzo. The Turks captured Lesbos in 1462 and Gateluzzi state was gradually broken up. The island then remained in Turkish hands until 1912.